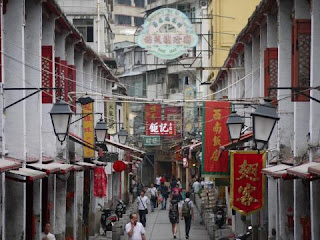 Macau is an island 65km off of Hong Kong. Both are part of China. But in order to travel from one to the other, you have to go through an immigration procedure
that requires a passport and entry and exit declarations. The immigration hall in Macau is very large and was packed with people; it took nearly an hour to get in. Oddly I was a head taller than almost everyone else there.

Gambling is legal in Macau, and only in Macau. So I took the shuttle bus to the
Venetian Casino to see Venice first-hand, like a friend who was there a few weeks earlier (hi Martin). It’s a giant mall with facades inspired by Venetian architecture, two Canals, lots of bridges, a copy of St. Marcus square, a campanile, the works, under a blue artificial sky. A little artistic freedom made the buildings all look like buildings in a mall, and the Canal Grande was about four meters wide and smelled like chlorine instead of you know what. But they had gondolas and a Chinese gondoliere who belted out O Sole Mio at the top of her voice. Incredibly cheesy and bizarre but you have to admire the effort.

Ok, to the real Macau. It was a Portuguese colony and you can still see that. Around the main square, Largo do Senado, the colonial architecture was preserved perfectly, but it’s packed with tourist, like the surrounding shopping streets. But walk a little further and there are little crooked alleys, only old buildings (all in desperate need of fresh paint), the characteristic tiny balconies that look like bird cages, little Chinese shops and people going about their work, and little traffic except in the few thoroughfares. Macau is wonderfully relaxing and enjoyable after Hong Kong and Kowloon. It seems that Macau was able to preserve its authenticity and its soul, apart from a few tourist watering holes. And the eastern edge of town, which is a loud and soulless modern town.

One of those is the church of St. Paul, built by Jesuits in the seventeenth century and burned down in the eighteenth, leaving only the front facade standing. It is quite ornate, and has become Macau’s main landmark. There is also an old fort next to it. I enjoyed Macau quite a bit, if I hadn’t bought a ticket to Guangzhou and made a reservation there I might have stayed there overnight. 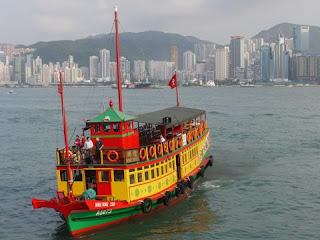 Took the Star Ferry to Kowloon. While Hong Kong island, where I am staying, is a long thin half-moon of a city stretching along the bay waterfront, Kowloon is the peninsula across the bay. There is a Cultural Center with some rather uninspired architecture at the ferry landing, but with a fantastic view of the curved Hong Kong island skyline and the mountains behind it. There is a sign “beware of the pedestrians”.

Kowloon is much friendlier than Hong Kong island – the traffic isn’t quite as murderous, the waterfront is accessible and not a tangle of freeways, they have trees and a very nice park with fragrant flower gardens, ponds with koi and turtles, a little hedge maze, flamingos, and an aviary. A great place to while away a few hours. The main shopping street is Nathan Road, lined with old trees. It has the same luxury chain stores as any other major shopping street on the planet. What the others don’t have is sleazy operators every ten meters who whisper “copy watch?” in youir ear. One was offering a “girl market”.

I tried to get food at Knutsfort terraces, a narrow street known for its restaurants, but it’s mostly Italian places that sell pizza and “braised spaghetti”. I can have that at home. I found a small Chinese restaurant not overrun with tour groups, but I am afraid I can get that better at home too… I like meat well-prepared, not by cutting an animals into ribbons and serving the shreds with skin, bone pieces, and tendons still hanging off of it. 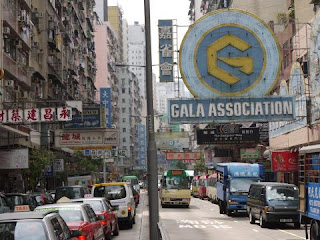 Arrived in Hong Kong. Places are hard to find here – there are very few street signs, had to ask locals to find the hotel. To encourage me, there is a sign in the elevator saying that the hotel is illegal becaus the building is residential only. But who would want to live in such a tiny apartment?

Hong Kong looks like someone wanted to build Los Angeles but only had Kaliningrad to work with. There are the shiny skyscrapers, but most of the buildings and towers are slightly dilapidated chicken coops with fading paint and, judging by the floor space and symmetry, tiny apartments. Little air conditioning units grow on the sides like fungus. Hong Kong is large but not as large as you’d think with its population of 6.9 million.

There are 7-Eleven convenience stores everywhere. They don’t have very much that one would want to buy. They do have Minute Maid orange juice whole list of ingredients includes “fish products”. Yuck. Had good Dim Sum today in Sheung Wan, which is supposed to be something like a traditional downtown and actually has a few pleasant temples and gardens tucked away between those residential towers that make the skyline look a little like tooth decay. Wasn’t as good as Cafe Aroma in Berlin though.