La Paz, Bolivia’s seat of government, stretches from an altitude of 3200 to 4000 meters. The center follows a narrow valley, with avenue Prado in the middle. The various neighborhoods climb up steeply on both sides, without much regard for the terrain. Downtown isn’t much to write home about, it’s incredibly congested and mostly built from dirty concrete and open bricks. There’s apparently some tax scam involving unfinished buildings, so not much is ever finished.

Here, too, commerce doesn’t so much happen in regular shops, but out on the street, in dingy covered markets, and hole-in-the-wall shops. Once we saw street vendor carts vanish when police was approaching, and reappear just as quickly a minute later.

We rented a taxi for the afternoon and had the driver show us around. The affluent leafy neighborhoods are at the lowest point; the poorest are the highest. We also saw the “moon valley” with bizarre needle-like rock formations, probably on the theory that erosion is typical on the moon. In any case, views from the hills down on the city, with the mountains as a backdrop, are fantastic. Also because the buildings don’t look as bad from a distance. 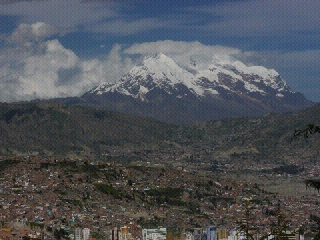