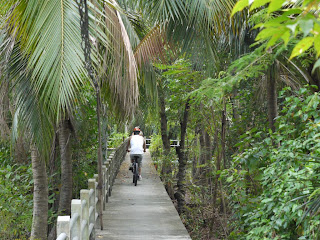 Wat Saket, the Golden Mount, is a steep and tall artificial hill north of the old town, with whitewashed staircases all the way up and a golden Chedi on top. A procession of monks in bright orange robes were marching up, beating a gong and chatting for a while, and then back down. The views from the top is great. People are praying, and there is a souvenir shop too. At the foot of the hill is a modern wat with a huge golden sitting Buddha. On the way there I was once again stalked by a nice guy who is a professional (check), has a brother in Frankfurt (check), Wat Saket is closed today (check) – and then he turned and left without another word.

I walked to the old downtown, where the palace is. There are no skytrains here, no massive structure like that could be built there. I used a river taxi on the Chao Praya instead. The city is unusually quiet, and there were colorful military parades, because this is king Bhumibol’s birthday and the king is highly revered in Thailand. At night they had massive fireworks.

I had booked a bicycle tour with Spice Roads to the Bangkok Jungle, Bang Kra Jao. That’s part of a peninsula formed by a loop of the Chao Praya, connected to the city only by a narrow land bridge. It’s quite large, and even though it’s very close to Bangkok’s Sukhumvit business district, it’s undeveloped. There are two short narrow roads, and a maze of narrow raised conrete walkways through dense forests and rice fields. There are a few small farm houses and a very small wat. Unbelievable that such a peaceful place can exist so close to the center of Bangkok. For once, I had a good well-maintained bicycle with the correct size, and a helmet. Very nice ride.