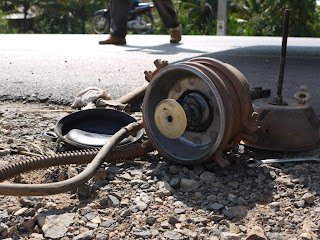 A travel day in a long parade of buses. First a minibus to the Old Market bus stop in Siem Reap, then another minibus around the bloock to the VIP bus stop, then a big bus towards Poipet at the Thai border. Its brakes failed, and after rummaging around under the bus with very large wrenches and disassembling big chunks of metal found there, they found us yet another bus and we continued to the border. The dusty and bumpy dirt road we had used in 2006 was gone and replaced with a smooth paved freeway. Poipet is the only place in Cambodia where casinos are legal, and they are building two there, just past Cambodian immigration.

On the Thai side, another minibus brought us to the bus stop, where we were all summarily forgotten. Nobody seemed to know who goes where and in which bus, so I kept nagging everybody in uniform and got put on a minibus quickly. Thai freeways are wide and modern and we arrived in Bangkok quickly. I was dropped at a skytrain stop and found my way to the hotel I had reserved.