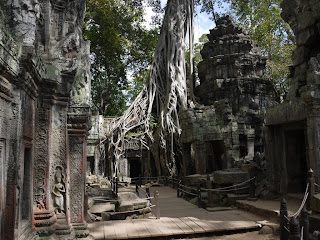 I rented a tuk-tuk for the day and went out to Angkor, the old Khmer temples. I focused on temples that I had missed on my previous visit in 2006. The circular temple in the northeast in the middle of a pool, surrounded by four smaller pools, was dry in 2006 but now the pools were filled, turning a dusty ruin into an enchanted place. I visited several more remote temples and wandered their extensive mazes of corridors and halls. Some had collapsed but most were restored. I was amazed that there were almost no other tourists, I even got my ticket without waiting at all.

Of course I also briefly visited the three most famous temples of Angkor: Ta Prohm, the Bayon, and Angkor Wat. Ta Prohm was my favorite in 2006: dark buildings, some collapsed, rising from the forest, mysterious, serene, and majestic. Huge tree roots were gripping the temples like alien tentacles, as if nature was clawing back what was once a jungle. It doesn’t just look like a Tombraider set, it was a Tombraider set. But Lara Croft won’t return. Ta Prohm was tamed and had its mystery and atmosphere squeezed out. Most exterior rubble and low vegetation was cleared away, leaving the temples standing naked, and wooden walkways were built including roped-off platforms right in front of scenic spots for the tourists to stand on and have their picture taken. They are even building a new concrete Naga passage to the temple. Morons. I guess it looked good on paper.

The Bayon with its many towers adorned with huge sculpted Buddha faces facing in four directions, and its maze of dark passages underneath, is still what it was in 2006. It has to be explored to be appreciated, from a distance it looks like a mound of rubble but it’s fantastic inside and justly famous.

The central complex, Angkor Wat, was the only temple filled with tourists and tour groups, but it was being renovated and the central temple pyramid was closed. Not much to see there and no views anymore. It was magic in 2006. If there was no Unesco to recognize places like Angkor, they’d have to set one up just for Angkor to give it its dues.

Siem Reap is where everyone is heading for hotels and restaurants. On my last visit, Siem Reap’s Old Market district was just a dirt road lined with old French facades. Now it’s paved, reducing its former small-town charm somewhat but they managed to give the place a pleasant hipness that can stand up to any western standard. It doesn’t have much to do with Cambodian culture though. Touts offer massages, girls, boys, marijuana, and other pleasures for those inclined. I had an excellent fish amok instead (a Cambodian fish curry served in a coconut shell). There is no ice cream in Laos, but there is in Cambodia, and the Khmer fruit and Khmer spices flavors were excellent.