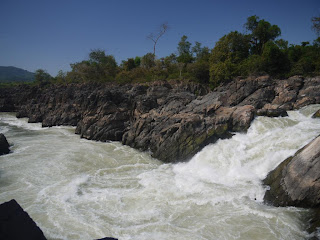 Rented one of those impractical bicycles and rode south to Don Khon island, across the French bridge. They built the bridge for the only railway ever operating in Laos; the remains of one engine are still rusting away at the bridge. Rode a narrow footpath through a wat and bamboo, palm, and banyan forests to Tat Somphamit, aka the Li Phi falls. They are not very high, the highest cascades less than ten meters, but a tremendous volume of Mekong water is crashing down at high speed with a loud roar through a rocky canyon. Besides two large falls, there are numerous smaller ones that keep the water light green and covered with white foam for a long way.

Next I went all the way to the southern end of Don Khon, where I found a small beach jutting out between the main flow of the Mekong and a rapidly flowing side channel that has washed out a quiet pool. Went swimming for a while. It’s impossible to swim against the current – even long-tail boats slow to a crawl – but approaching sideways from the pool and grabbing a root while the water rushes past is fun. Although I have travelled on the Mekong before, I have never swum in it before. Southern Laos is hot and sunny but not humid, and the water is quite warm. Not bad for the last day of November.