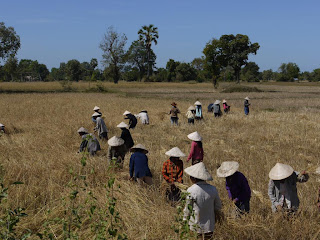 My guesthouse runs a ferry down the Mekong river. It takes 90 minutes to reach Don Det, another inhabited island of Si Phan Don. many fishermen are squatting on the tails of their little boats, casting their nets. Despite its width, the river flows quite quickly.

The village of Don Det is supremely laid back, strung out along a lone dirt path along the river bank. At the ferry landing, where the boats just run up to the beach, there are a number of guesthouses and restaurants; further down the path are small wooden and bamboo houses on stilts where families live and work in the space under their houses. There are a few backpackers, but everything is extremely quiet.

I wanted a peaceful place in Laos’ countryside, and that’s exactly what I got. My guesthouse is at the northern tip of the island, and my balcony with a hammock is built on stilts over the river bank. As I write this I am watching the sunset over the Mekong. There is no electricity in Don Det, and hence no hot showers, on the island; some places run a generator for a few hours in the evening. The place does look ready to party, but there were none when I was there.

I walked to other end of the island through fields being harvested by old women (picture), until I reached an old bridge from French colonial times that leads to the next island south, Don Khon (not to be confused with Don Khong). There is a small village on the other side, even quieter than Don Det. I got the impression that it attracts a much older crowd of tourists. I did check out the Sala Phaet hotel, which consists of some droopy neglected-looking huts on rafts in the river, for ten times the price of other guesthouses.