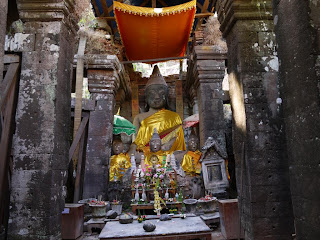 The regular bus to Pakse in southern Laos would have taken 18 hours, and the VIP bus runs at night only, so I figured I might as well fly. In Pakse I connected to a songthaew (a brightly colored flatbed truck with benches and a roof) to Chamnpasak, which promptly left after waiting for an hour to fill up. At Champasak, we had to cross the Mekong using a ferry (really just a wooden raft bolted onto a pair of canoes), after another hour of waiting. Every thing here moves slowly and it’s a welcome change after Vientiane. Met a guy with a chicken on his lap, and a cynical bitter Australian who has been travelling for 30 years.

Champasak is a sleepy one-road village along the Mekong. Most of the guesthouses and restaurants have terraces built on stilts on the bank of the river. People come here to see Wat Phu, a Khmer temple eight km towards the mountains. It’s built on three levels connected by steep broken stone steps. The architecture is very similar to Angkor, and it’s about as old, but far smaller and in worse shape. Most windows are bricked up, and the walls are crumbling, roofs have fallen, and scaffolds hold up leaning walls and columns. Yet there still is a buddha shrine. It feels like a Tombraider set after the final showdown. Impressive, in a country ravaged by wars where few buildings are older than a hundred years.