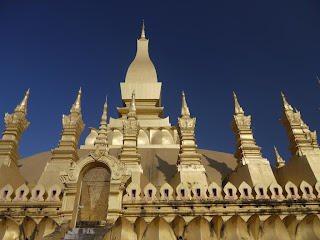 Wat Si Saket is Vientiane’s oldest temple. Arcades along the outer walls of the compound have hundreds of sitting buddha statues, and thousands of little ones in niches in the wall. The walls of the central wat with the buddha shrine are covered with murals, but they are crumbling and chipping, and in some places the bricks are exposed and in others repairs were done rather inexpertly. The temple is very peaceful and in a state of picturesque decay.

More than half of Talat Sao, Vientiane’s morning market, is already gone, they are building an eight-story mall in its place. What’s left is mostly clothes, electronics, and pirated CDs and DVDs. It appears that if you want to sell an mp3 player these days, you must ape Apple’s logos and design, but never mind the quality. Talat Khua Din is Talat Sao’s slummy little brother, complete with narrow dirt paths, shredded tarps, corrugated metal roofs, and a covered meat market with buzzing flies.

The National Museum has a few pots and tools, but otherwise mostly photos. If I get the gist of it right, it’s about the courageous heroic patriotic comrades of the glorious victorious revolutionary Lao Liberation Army, which won the war against the fascist reactionary aggressive US imperialists and their puppets, traitors, savage murderous henchmen, and mercenaries, and Laos has been a communist paradise ever since. It’s especially relentless on US imperialists and puppets. To be fair, the US brought enormous destruction and suffering to Laos – unexploded US bombs kill people even today – and the US did lose that war like every other war they ever started.

I went to numerous other temples, but the one that stood out was Pha That Luang (picture), a huge golden shrine with many spires. It’s a symbol of Laos and reproduced on the 2000 kip note. I talked to a smiling young monk holding a parasol and a Lao/English dictionary.