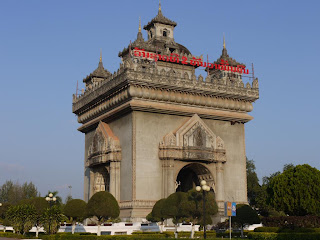 Vientiane, Laos’ capital, runs along the Mekong river. The height of the river varies, and large sections of Vientiane’s riverfront get flooded seasonally. A dam, freshly reinforced with sandbags, protects the city; children play soccer at the shore. The Mekong also divides Laos from Thailand. Late in the afternoon, I watched the sun set over the Thai side of the river.

Vientiane is not as pretty as Luang Prabang and not as peaceful as Vang Vieng, but it’s a real live city that hasn’t signed over its body and soul to tourism. The pizza parlors are there if you look for them, but the people who live and work here have other concerns and the tourists get lost in the crowds. Vientiane is quiet enough to be pleasant, yet alive and humming like an Asian city and capital should be.

Patuxay, the vitory gate, is said to resemble the Arc de Triomphe in Paris but doesn’t, at all. It looks imposing from a distance. But from a closer distance, it appears even less impressive, like a monster of concrete. The preceding sentence is a verbatim quote from a large sign mounted on the gate. Honesty is a virtue… Inside, the gate is packed with souvenir vendors.

Vientiane used to be a French colonial capital, and French language is visible everywhere. And they have good honest Laotian food. I’ll stay here a little.