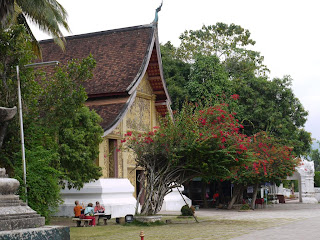 Luang Prabang’s small old town has a large number of Buddhist temples, all of which are active with many orange-robed monks about. Most are small, but Wat Xieng Thong is an impressive large complex with not only the usual large hall that houses the Buddha shrine, but also a smaller hall with a huge golden hearse for kings, and numerous smaller shrines and living quarters for the monks. Their orange laundry hangs out to dry between the shrines. The walls, inside and out, are covered with gold, gold painting, and glittering glass mosaics.

Took a tour bus to Kuang Si, a park with a large waterfall that drops from a tall hill, and then through a series of wide cascades between turquoise pools. Very beautiful. There are lots of trails in the forest, and viewpoints to watch the falls. There was an annoying loud American on the bus that kept dropping names of all the unexciting places he’s been to in Asia and his boring adventures there. He has seen people on the roof of his overcrowded bus, yawn.

Luang Prabang is very pretty and avoids all the mistakes that have turned so many other Asian cities into swirling maelstroms of honking traffic and faceless office towers, but it sold its ssoul to tourism. One hears a lot more German than Lao in the streets, and it’s packed with guesthouses, tour operators, and fancy restaurants. It’s difficult to find Lao food, it’s just an afterthought tacked on to the end of the pizza, burger, and spaghetti sections of the menus (under “Lao cousins” in one place I was eating at). Tomorrow I’ll escape to a place without Internet, phones, cell towers, and (most of the day) electricity.