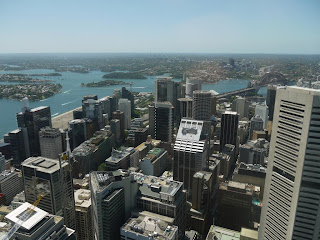 Last day in Sydney, mopping up a few sights before my flight leaves in the evening. I picked a ferryboat at random and went out to the western suburbs, passing under the Harbour Bridge. The area becomes scenic very quickly, small houses perched on the hills around the western bay with numerous little coves and marinas. Sydney Tower is a great vantage point to see just how green and suburban sydney is – the ocean, bays, beaches, parks, and forests are everywhere. Only the CBD doesn’t look good from the Tower: you only see the air conditioners on the roofs of nondescript highrises, and the entire Harbour Area – the jewel of Sydney – is mostly hidden behind other towers.

They run tours of the Sydney Opera every 30 minutes, but few tours include both concert halls and the drama theaters because of ongoing shows. My 12:30 tour did, though. The opera building is rather more impressive from the outside than the inside because little of the dramatic roof is visible, but it’s very modern and airy, with views of the water everywhere, in a Sixties kind of way. Sydney Opera is a World Heritage and deservedly one of the most recognized building on earth.

Also checked out museums (not as many as I would have liked), and walked about town. Itwas another warm day, over 30 degrees C; summer is near. At the same time they have Christmas trees everywhere, and they are building a huge Christmas tree with a steel trunk and branches and plastic needles in Martin Square in the middle of the CBD. Fairly good imitation though. Christmas is less than five weeks from now.

I am writing this at Bangkok airport. Finally, back in Asia! I’ll catch a flight to Lao soon.