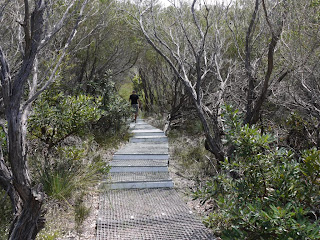 Took a ferry to Manly, a suburb that is part of Sydney’s Northern Beaches. Corso, the main street, is short and connects the bay ferry terminal on one side of town with the ocean on the other side.

They have a former army reserve with a quarantine station at the North Head, which is opposite the South Head I had visited two days earlier. Both form the gateway of Sydney Bay to the ocean. The army is gone, and the area is now a nature reserve with a bushwalk trail. Saw only two other visitors.

The Northern Beaches are much quieter and more difficult to reach than the Eastern Beaches. Saw only a few surfers. The final stop was Palm Beach, a crescent of sand overlooked by very expensive weekend mansions.

Tomorrow evening, after a final few hours in Australia, I’ll be on my way to Luang Prabang in Lao.