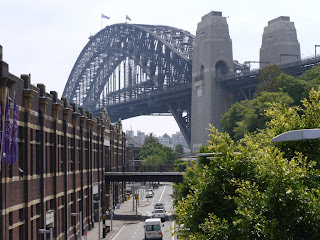 Checked out The Rock. It used to be a dangerous part of town a hundred years ago but its old brick warehouses got remodeled into expensive restaurants, cafes, and galleries. Some of its alleys are more modern redevelopments that pay less attention to the old style, but it’s still a very nice neighborhood in a very prominent location at the Harbor Bridge. Sydney loves its waterfront and puts promenades, piers, and parks there; unlike, say, Paris or Seattle where they like to close off the waterfront for freeways.