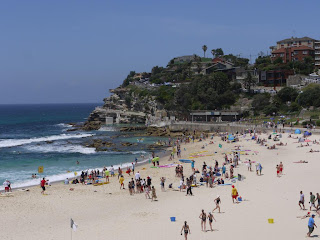 Yesterday was mountains, today is beaches. Sydney has countless beaches. Started at Bronte Beach, one of Sydney’s Eastern Beaches facing the ocean, and walked to Bondi Beach, Sydney’s most famous beach. There is path that connects them all, and in November there is an event called Sculpture By The Sea where perhaps a hundred sculptures are placed along the ocean shore walk. There is a giant straw out in the sea, plastic eyeballs embedded in a rock wall, a wicker and a brass horse, and many other figures and abstract shapes. The path is quite busy. Bondi Beach itself has become a victim of its beauty. There is lots of traffic and expensive hotels and restaurants. Whales were breaking through bthe waves out on the ocean, chased by small tourist boats.

Also saw several bay beaches. They don’t have the dramatic rock cliffs. At South Head, where Sydney Bay opens to the ocean, is a viewpoint called The Gap with a panorama of both an ocean beach and a bay beach. Went swimming at a less crowded beach near Botany Bay in the south.