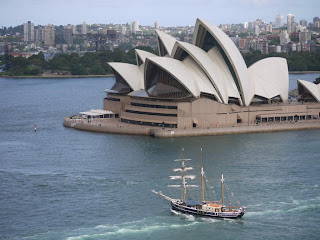 Ok, promise, Sydney will be the last distraction in this blog before the action returns to Asia. I arrived in the early afternoon and had time for a walk around Sydney Harbor.

Sydney Opera’s roof is every bit as extravagant as it looks on the postcards. It’s different from every angle. The waterfront between the opera and the ferry poiers in the middle of Sydney Harbor houses numerous cafes with outdoor seating, and various speedboat operators. The opposite side has green spaces, street musicians on the waterfront promenade, and great views of the opera. Behind the promenade, there is an old district called The Rock with old brick warehouses that have been converted to trendy restaurants and hotels. It’s all very inviting.

Sydney Harbor Bridge is a massive structure looming from the western side of the harbor. There is a walkway on the eastern side with fantastuic views of the harbor. Unlike Melbourne and Hobart, Sydney is an outdoor place where people enjoy sitting out in the sun. It’s already my favorite Australian city of the few I have seen so far.

It’s very strange to be here while summer is coming up, people go out to the beaches and enjoy the warm weather, and prepare for Christmas.