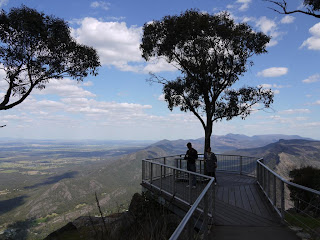 The Grampian Mountains are west of Melbourne, just past the Pyrenees. Australia is almost completely flat so they have to economize – anything you can’t throw a tennis ball over is a mountain, and the Grampians peak at 1167 meters. The road there is green farmland, site of Australia’s Gold Rush in the 1850s. The road passes through the town of Ararat, made the home of the criminally insane by a big prison, now closed. Otherwise it’s famous for a pedestrian crossing that leads from one pub to the other; fame is relative. And they play a special kind of football, a mixture of rugby (kick a lemon-shaped ball), Irish football (kick a soccer ball), and an aborigine ball game (kick a possum, now endangered).

The bus passes by a number of lookouts with views over the valleys, lakes, and surrounding farmland. Also followed a trail to the McKenzie waterfall. There is a cultural center with excellent displays describing how the British colonists killed virtually all aborigines. Saw many kangaroos hopping through the fields and forests. At one point on the trail, a kangaroo was looking at me from behind a bush, waiting for me to pass, then hopped up to the trail. Kangaroos are big animals, you can see the muscles working hard when it’s thumping along on the trail. It’s not especially graceful. They also have a couple of little extinct volcanos, now overgrown with trees. No hot acid lakes and boiling sulphur here, like on Java.