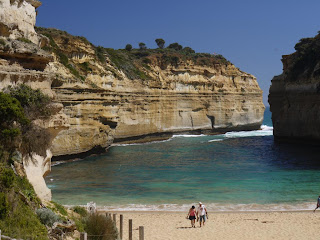 The Great Ocean Road is Victoria’s main attraction. The coastline is very rugged and consists of steep limestone cliffs, washed out by the ocean so that a number of tiny islands and pillars have remained standing out in the ocean. The deep blue ocean and sky, the yellow limestone cliffs, the white surf, and the green low vegetation on top make it very beautiful. Lookouts with little parking lots are strategically placed along the shore. Since I was on a tourist bus we stopped at all of them.

The coast is called Shipwreck Coast, some 600 ships have sunk here over the past 200 years. It appears that most sailors died in part because they couldn’t be bothered to learn to swim. The bays with the lookouts have names like Bay of Islands, Bay of Martyrs (aborigines killed by colonists), and London Bridge, a double rock bridge that has, alas, collapsed a few years back. We also went to a beautiful secluded beach ringed by steep sandstone cliffs. The sand is hot but the water is very cold. In the evening we went to the Twelve Apostles, a set of eight tall rocks in the sea. Very beautiful. The sunset was just a gradual darkening though, the rocks lost their definition and mist rolled in.