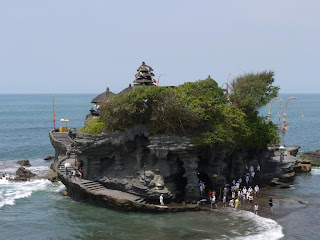 Tanah Lot is a pair of Hindu temples built on large rocks in the sea. The larger one is reached by wading out through shallow water on the lee side of the rock, while the surf crashes on the rock at the other sides. They have a holy spring in a cave at the bottom, where everybody gets sprinkled with holy water and gets some rice stuck to the forehead. That’s your ticket to walk up the stairs to the temple, except that stair doesn’t go very far because the temple at the top is closed to visitors.

The other rock is similar but much smaller, and instead of wading there is a rock bridge. It’s closed too. They also have a cave with a big holy snake, but the cave but the roof is very low, maybe 80cm, and there is lots of garbage. Several local tourists wanted their picture taken with me. My driver says I look like a movie actor, maybe he is looking for a bigger tip? Julia Roberts is currently filming just east of here, at Ubud.

Had a great Indonesian lunch, with bakwan dumplings and “sicko juice”. That’s spirulina, banana, apple, and papaya; deep green. The other meaning of the word is not known here.