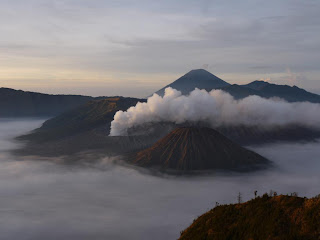 A jeep picked me up at 3:45 to take me to the top of Mt. Penanjakan. The view of the sunrise is fantastic there. Much of the large crater with the Bromo volcano in the middle and its white plume are spread out before us. The bottom of the crater is with a sea of fog from which the volcano and a few other peaks rise. There are maybe 50 other jeeps and vans parked there, and the viewpoint platform is packed with other tourists, who enthusiastically take snapshots of the sunrise with a lightning storm of flashes.

On the way down up I couldn’t see much because of the fog and the dust, but the return trip revealed just how steep, deeply rutted, and close to the edge of the cliff the road up Penanjakan is. The jeep trip passes the volcano so I paid it another visit. I didn’t have it to myself like the day before though; hundreds of tourists had the same idea and lots of guides with horses were expecting them. A long caravan of tourists trundled up the path to the volcano’s crater rim. Because of the fog and dim yellow sun, the scene had a slightly surreal Lawrence of Arabia feel.

Took a minibus to Probolinggo, then another to Ijen, then yet another because the previous one broke down. The distance is small but takes six hours anyway because when the road reaches the mountains, the road is more potholes than asphalt, and big trucks very slowly crawl up the mountain, sometimes two side by side, passing at 5 km/h. Much of East Java is a series of national parks like Bromo and Ijen, which is the easternmost one. There are lots of Arabica coffee plantations on the way. After arrival, I could just barely see a nearby waterfall before sunset at 17:20.