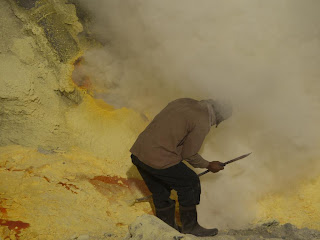 It’s three km climbing a steep dirt path up the forested slopes from the minibus parking lot in Ijem to the top of the crater rim of the Ijen volcano. A stream of workers carrying a pole with a basket full of big sulphur bricks at each end over their shoulders. I talked to Suleiman, going back up with empty baskets; he carries as much as 100kg! I tried a 70kg basket and could barely walk straight, but they go up and down the mountain with this load. Many have big scars on their shoulders.

There is a large green lake of hot acid in the crater of the volcano. Near the surface steam comes from crevices at high pressure, carrying sulphur. The crater wall is yellow there all the way to the top.

I climbed down the extremely steep rocky trail to a place near the bottom of the crater where I could watch the workers. The trail is barely discernible, just a big rock face where the workers carry they 80-100kg loads up. For me it was hard enough doing it without any load. I saw one guy doing it barefoot, and another whose legs were shaking. They get 30 kilorupees per load carried up there and down the volcano, about two euro. They do it two or three times a day. Nobody seems to be over 30.

From my viewpoint I could see workers hacking the condensating sulphur into big bricks that get loaded into the baskets. Sulphur is yellow when cooled, and orange when it’s still liquid. The steam is poisonous and cannot be breathed, but they stand right where it comes from the ground; I heard a lot of coughing. Eventually I had to run away from a big cloud coming my way; breathing through a scarf doesn’t stop the sulphur.

If you sometimes don’t like your job, imagine doing theirs.

The minibus took us to Ketapang harbor, where I caught a ferry. I am now on Bali.