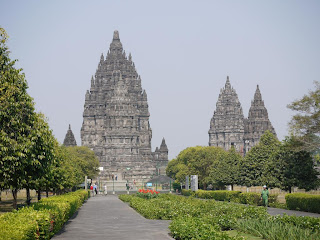 Prambanan is a Hindu temple complex of enormous 7th-century stupas on a large terrace, dedicated to Brahma, Shiva, and Vishnu. It’s a Unesco World Heritage site and under extensive restauration; one stupa is all scaffolded and sevaral are closed to visitors. The stonemasons are clinking away on the stupas and on the ground to prepare large stones. They are nearly done in the central complex. Saw a worker free-climb one of the stupas, he looked like a small white dot on the massive structure. Prambanan is not as grand as Angkor Wat in Cambodia but gives a similar feeling of ancient majesty.

Solo is a small version of Yogyakarta, a nice working town with few tourist sights (and most of those, like the Kraton and the Pura, were closed). It’s very relaxing that nobody wants to drag you into their batik galleries here and the rickshaw touts are too sleepy to annoy you all the time.

Met a guy at a food stall who works as an English tutor. We talked for quite a while about life in Indonesia and Europe, and he invited me to join one of his lessons. We went to a fancy house with a large terrace, garden, and iron fence close to downtown Solo, where two earnest but shy boys, and later a university student, joined us for the lesson. It’s mostly about talking because English teaching at schools is very formal, but also about TOEFL worksheets. Everyone here wants to travel but the relative cost to leave Indonesia is very high.

Then my teacher friend and the student joined the English tutor gang at a street food stall where they often hang out at night, and they invited me along. We had great discussions, sitting on mats and sipping tea for many hours until after midnight. One of them sails on cruise ships to the Bahamas, and another is a professor who worked for two years as a waiter in the US. I loved it, getting to know people is time much better spent than checking off yet another temple from a list!