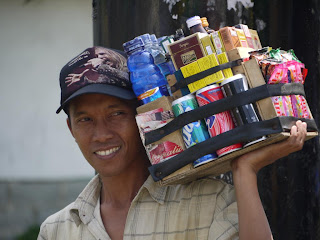 Spent 15 hours in buses. People here work with numbers loosely – eight hours become twelve, and 5,000 Rp is the same as 50,000 except when paying. And we spent over two hours just leaving Bandung’s downtown gridlock. And the bus from Bogor to Bandung decided to flit by Jakarta. Arrived in Yogyakarta – or Jogja as people call it here – after midnight.

But the scenery of Central Java was great, even better than on Puncak pass. Many green hills, tea plantations, rice fields, and scenically placed straw huts and little villages. Except for the last two hours or so the two-lane road was snaking up and down the hills with hardly a straight stretch – children were retching into plastic bags helpfully hanging from the roof all around me. I only wish that I could have done only the middle five hours. I have very few photos, unfortunately.