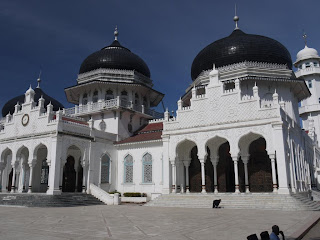 Took the ferry back to Uleh Leh, VIP class this time. They are running a Karaoke video of ’60s rock songs. A becak driver took us into town, chatting all the way.

Banda Aceh is known to the world as the place of a civil war between a fierce Islamic separatist movement and the military of a repressive regime, and the place where the 2004 tsunami struck hardest and left much of the city in ruins, and washed away an entire residential suburb close to Uleh Leh harbor. The pictures on the world’s TVs showed a single mosque in the middle of all the rubble still standing. We visited that mosque; it’s beautiful ornate five-domed building gleaming white in the sun, with black domes. The city around it has been repaired and rebuilt, and now looks much cleaner and much better maintained than other cities of its kind elsewhere. Even the suburb towards Uleh Leh has been rebuilt with prim little houses, gardens, and driveways with SUVs. Banda Aceh is back on the map; it’s not rich or packed with tourist sights but it has become a very pleasant place.

Everyone here is very open and friendly. People keep calling out to us, not because they want to sell something but because they are genuinely curious and would like to chat a little. We usually conclude after a few minutes that we don’t share enough English, but that we enjoyed talking, so we say goodbye and smile and wave. Until the next chat. When we were ready to leave for the airport, it started raining and we didn’t see a taxi, so some shopkeepers found one for us. The driver later stopped at the edge of the freeway to give us his name and number. It’s all very pleasant and relaxing, I wish more of Asia would be like that.Anyone who thinks that Muslim countries are necessarily strict and cheerless places should visit Banda Aceh, and stay a little rather than rushing to the islands.

We flew to Jakarta because the southern half of Sumatra is not interesting; much of Indonesia’s oil industry is there. At 19:52 local time, we crossed the equator. Another first; I had never been on the southern hemisphere. We are now in Jakarta, Indonesia’s capital on the island of Java.