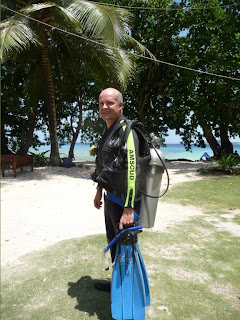 There is no beer on the island, officially. Sumatra is Islamic. But they aren’t too religious about Islam here so they smuggle beer to the beach, and store it in a separate refrigerator and list it on the menu as “B”. A can costs as much as a meal but it’s not going to run out.

Elsewhere, like in Medan, you see women wearing a full-body burkha leaving only an eye slit, a fashion I call Black Raven. Which is actually more a cultural thing; Christian Europe also required women to cover their hair and skin five hundred years ago. But medieval customs meet modern technology when a fully veiled black raven is intently pecking at her cell phone. I imagine that she is twittering something like “my burkha itches”. Other women wear a veil that leaves only their face free, plus skintight shirt and pants. They’d get flogged for that in benighted countries like Sudan, after the mullahs recover from their heart attacks. Here on the island you do ok if, in the words of a restaurant owner I talked to, you don’t swim nude or have sex on the beach. That’s only two rules away from some places in Thailand.

Anyway, I digress. Did another dive with Jim, minus the theory this time. It was much easier this time to breathe to control depth, rather than getting oxygen, automatically without thinking, and overcorrection was almost gone. We had 45 minutes to float at a depth of 12 meters, watching corals and fish far more colorful and varied than the ones near the surface we saw when snorkeling. Jim pointed out clownfish (now called Nemos), spiny lionfish that look like flying dozens of flags, toadlike stonefish than change color to match the background, and long thin trumpetfish hanging heads down. It’s great to watch the other divers floating in the blue water weightlessly, with streams of bubbles rising up. The surface is invisible.