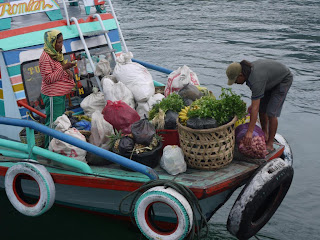 Saturday was mostly a travel day. Settled the hotel bill – 65 euro for two people, three nights, and all meals and juices – the ferry to Parapat, a minibus to Medan, and a flight to Banda Aceh. There is a restaurant with a juice bar at the airport, but no matter what you order ou get either orange or apple juice. They have bottled juice too; one list of ingredients says “100% pure sugar”. The schedule displays showed a noise Firefox connection error, and the gate displays said “no signal” so the flights were called out by an attendant.

A strong thunderstorm delayed the flight for one hour, and then the airport bus from the gate to the plane got stuck for 20 minutes in traffic on the apron, which led to honking and some daring passing maneuvers in front of the airplane. The Prapat hotel in Banda Aceh looks like an American motel, except that it’s primitive, loud, expensive, and has no hot water and no sheets.