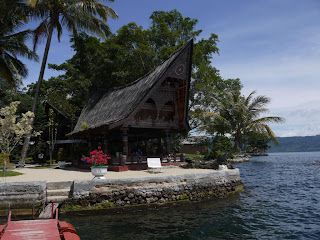 Rented bicycles to ride to Tomok a little south on the island, but it’s basically a cluster of souvenir shops. The ride north to Simanindo was much more interesting. The road at first ran between the lakeshore and the mountains, through incredibly green fields and tiny villages, and grazing oxen led by ropes. Later the terrain turns hilly. There are lots of churches and little Christian cemetaries – the Batak people who live on the island are mostly Christian – and older people whiling away their time in bars that scenically overlook the lake below. Everyone here is friendly, laid back, and not at all pushy.

At Simanindo they have a Batak museum with over a dozen well-preserved historical Batak houses with the characteristic curved and pointed roofs that keep the walls in shadow, thatched with straw. Elsewhere the straw has often been replaced with corrugated metal streaked with rust, and modern houses no longer sit on wooden stilts but on concrete foundations.

Overall we rode about 50km. Our Carolina hotel is certainly the nicest resort on the island we have seen, with the best lake access for swimming (photo), but their WLAN access is incredibly unreliable.