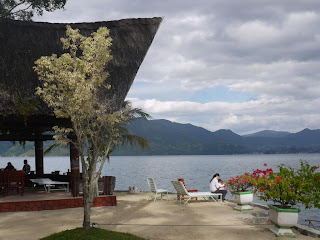 Danau Toba is a volcanic lake four hours southwest from Medan and 900 meters up, with an island called Tuk Tuk where all the good hotels are. It’s cool up there, and our hotel is a tranquil resort at the lakeshore with small huts built in the traditional style with steep swept gables, in a large tropical garden. The only thing to be heard here are birds singing, there is no traffic at all. Such a relief after the maelstrom called Medan. We’ll stay three nights here, rather than rushing from one attraction to the next.

Met a photo journalist on the bus who had just returned from Danang, where a strong earthquake struck last week. Apparently mostly the downtown highrises were affected, but the smaller houses where most people live were relatively undamaged. A lot of villages on the hillside have become victims of slides though. Also talked to Eric from Sydney who showed great pictures from northeast Borneo, maybe I’ll go there when my Indonesian visa runs out.

Right now I am not doing very much at all, other than writing my diary on a terrace overlooking the garden and the lake.