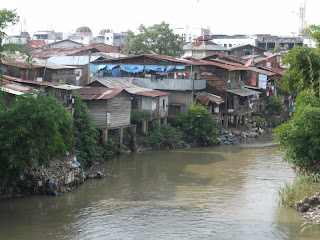 Medan in Sumatra is not a major tourist hub and boasts exactly two important sights. The Mesjid Raya mosque has impressive black domes, and a simple and elegant, although slightly worn, interior. People were sleeping on the carpets. To get in, we had to hide our shorts with sarongs available for tourists at the entrance. A very tenacious guide kept following us, and after deflecting all our attempts to send him away actually got angry when we refused to tip. Not a promising business model.

According to the Lonely Planet, the Istana Maimoon palace is crumbling, but in 2009 it was in good repair. Only two halls were open to the public though. A group of people were being costumed as princes for photos, and a small boy perched on the nose of the seat was proudly circling the palace on a big motorcycle.

Medan not only has the traffic-choked modern district with our hotel, but also a traffic-choked but otherwise pleasant upscale residential district called Polonia, with lots of trees, big mansions, and black SUVs; and a traffic-choked downtown with (possibly deliberately) neglected colonial architecture. The historical Tip Top restaurant had fantastic Sirsak juice, white but with a kind of strawberry taste. Like other cities before, Medan is considerably nicer when darkness cloaks the neglect. The picture shows a slum next to Polonia.

Haggled a becak (motorcycle taxi) to the hotel down from 50 to 15 kilorupees. Walked across the street to buy some water, and got pinned down at a juice stall by a thunderstorm with torrential rain. (Is rain always torrential in Indonesia?) Chatting with the boys running the booth and learned a lot of Indonesian phrases, but not what they mean, which limits the utility of my new skill.