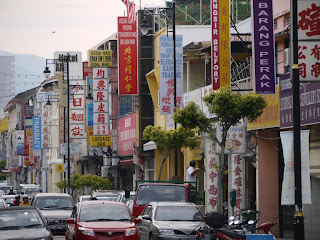 Pulau Pinang, aka Penang, is a large island off the west coast of Malaysia. The main town is Georgetown. Our hotel, the Segora Ninda, is a heritage building opoen to visitors. It’s charming but not as cosy as expected, and its heritage DHCP server is unbearably slow.

Georgetown’s Chinatown is a Unesco world heritage. It’s much larger than the one in Kuala Lumpur, and much less touristy, there are almost no souvenir shops or touts. It doesn’t feel like very authentic though because the locals treat it poorly – Chinese obliterate history where they can – it’s quite dilapidated except for the asphalt roads that carry heavy traffic everywhere. This Chinatown lacks the bustling life found elsewhere. Lots of parked cars, and closed shops and restaurants, further reduce the century-old houses to window dressing.

Of course, Georgetown also has the usual faceless modern town; and a Little India and a Colonial District that share Chinatown’s fate.