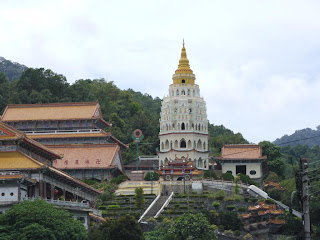 Cheong Fatt Tze was the Asian Rockefeller a hundred years ago. When he died, he left his huge mansion in Georgetown to his son under the condition that it won’t be sold until he dies, so after the family fortune went south they had to sell the furniture and rent rooms to over 30 families. Today it’s a museum and hotel, perfectly restored from those years of neglect. Feng Shui dictated that the back of the house be one step higher than the front to simulate a hillside, and the construction includes the four elements, iron, and wood. Actually wood couldn’t take the load so the beams are actually iron painted like wood, hoping that the gods won’t notice.

Took local bus 203 to Air Itan, which sounds like an airline but is a village in the middle of the island. The Kek Lok Sin temple there is a beautiful and large complex of temples on top of a hill, crowned by the 10,000 Buddha pagoda whose architecture is Chinese at the bottom, Thai in the middle, and Burmese on top. Several souvenir shops are conveniently located right in the prayer halls and pagodas.

After a short taxi ride we went up Penang hill, using a Swiss-built cable car to the top, 700 meters above the city. There is a small but colorful south Indian Hindu temple and a small mosque up there, and a loud and annoying snake show for tourists. The panorama is fantastic. Just as we returned to the cable car station, torrential rains started.

Georgetown looks nicer at night. The darkness hides crummy architecture. The rain has driven many outdoor restaurants indoors though, except in a very short alley near the waterfront where modern clubs and restaurants flash their lights. Malaysia is a Muslim country but some of the women here are dressed very perfunctorily.