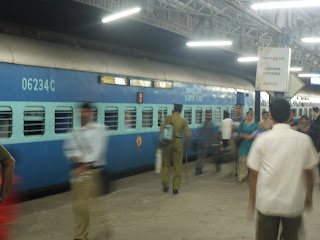 Made an excursion into the hills around Ooty. Wonderful views of the valley and the hills stretching to the horizon. There are many tea plantations. It’s another warm sunny summer day, but I am told that in two weeks the monsoon will bring lots of snow, in June!
Took a local bus to Mettupalayam, a village at the bottom of the hills where my train to Chennai will depart. The bus is a decrepit wheezing dinosaur with flapping metal sheets that have come loose outside, dirty seats and dirtier windows, and it’s packed with people. Seven of us squeezed into the back row, and when an eighth wanted to squeeze in, I suffered a momentarily lapse of understanding English and just smiled daftly. Tourists usually get away with that. The ride took two and a half hours for 51 kilometers and cost 17 rupees (27 euro cents).
The express train was one of those magnificent Indian trains that look like prison transports with barred windows. I got a 3AC bunk very similar to the one to Kunming in China; six bunks per compartment, which is open to the aisle. It’s less modern than the Chinese one, but very few people in India smoke or spit, and nobody did on the train. It arrived in Chennai at 4:30 in the morning as the sun started to rise.