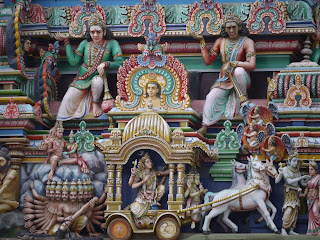 Did I mention that my palace suite in Ooty had a fireplace and a jacuzzi? The Residency Towers room in Chennai has neither, it’s more like an economy version of a Western Grand Hotel with lots of marble and columns. But it has a pool. Chennai (formerly Madras) itself is not very attractive; there are a few scattered temples with colorful statues piled high on the roof (the picture shows a small detail), and also a Ramakrishna temple with white columns with pink trim around a swami statue gaily hung with purple flower garlands.

It’s 42 degrees and humid in Chennai. I really can’t stand the heat, the humidity, the pollution, the garbage, the traffic and the incessant honking, the tenacious beggars, the slums, and the barefoot poverty anymore. I feel very tired of southern India, and I suspect I would even if it were 20 degrees cooler. I am told that the weather will stay unchanged for another two weeks, and then the monsoon rains begin.

So I have decided to take a vacation from my vacation and return to Berlin for a while. My flight leaves on Sunday. It’s the wrong time of the year to forge ahead here in the tropics; Indonesia will still be there in the fall and much more pleasant. For many years my year was centered on the Siggraph convention; it’s a nice thought to center this one on the monsoon season instead.

Also, my brain is full. I had a fantastic time during these two months, seeing so many places in China, Tibet, Nepal, and India, and I will surely return.

So, this blog will hibernate for a while until I return. Thanks for following me, and I’ll be happy to answer questions at w4d@bitrot.de. See you all later!