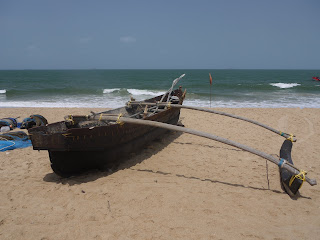 Can’t really spend time in Goa without hitting the beaches, so I hired a motorcycle driver for an excursion. Fort Aguada and Candolim are a little west of Panaji, looking out on the Arabian Sea. All the things one expects on any beach of that kind are there – beach pubs, huts for rent, white beaches with palm trees, paragliders and jet skis, and a sun so hot that it sends everyone running for cover. The lassis there are very good. What Candolim has and the others don’t is a huge old rusty cargo ship grounded close to the beach.

Panaji’s long-distance bus station is a long dusty strip along the Mumbai-Mangalore road. There are no signs anywhere, buses come and go and it took a while to find the right one late in the evening. I had booked a luxury bus but it turned out to be a fairly decrepit old sleeper bus with 22 body pods and some cramped seats. The motor is screaming at high rpm, and the bunks are too short, but at least is reasonably clean and the windows open. I must have managed to actually sleep a little during the ten hours to Mangalore, some 300km south.

They use a filthy hotel as a rest stop in Mangalore. I declined their offers of breakfast. The toilets – if a reeking hole in the ground in an unlit box deserves that name – are across a large courtyard; the space between the garbage piles is littered with garbage. I had decided that I don’t really want to stay in Mangalore and gave the driver some cash so he’d let me stay on the bus for another eight hours to Mysore, 200km inland.

The scenery between Mangalore and Mysore is very nice, mostly dense forest with very few villages, up and down the hills called the Western Ghats. When I finally arrived in Mysore at 14:00, I felt exhausted and grubby and checked into a nice modern hotel with AC. I’ve had enough Indian atmosphere for today.