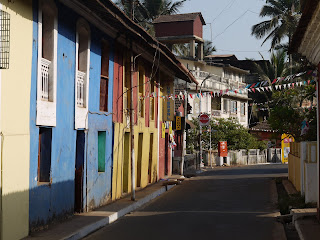 Old Goa was a great town once, in the sixteenth century, larger than Lisbon and London. No longer. But the huge elaborate churches, convents, and some ruins are still there, scenically scattered about a very large park with palm trees (one of which tried to drop a huge frond on me but missed), forests, and ponds. Few people live here any more, it’s like a giant theme park for colonial monuments. Some of these churches have seen Christian, Muslim, and Hindu services, but today they are well-preserved museums. No admissions are charged anywhere.

The sun burns down vertically (Goa is solidly tropical) so no walls see any sun and there is little shadow. People move slowly, or sit or sleep in the shadow. Even the few souvenir vendors who have made it out here seem lethargic and easily discouraged. I’ll catch a bus to Mangalore tomorrow, and then I think I’ll escape to the cooler hills.

The picture is from Panaji, a couple of blocks from my hotel. Nice quiet town, hard to believe it’s the capital of Goa.