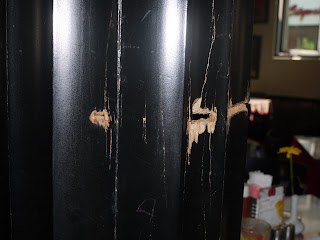 The hotel breakfast isn’t very good (“continental”, ugh) so I went to Leopold’s. That’s an old institution in Mumbai dating back to the British rajs. It was one of the targets of November’s terror attacks, and the bullet holes are still there. I hope it’s the last bullet hole I’ll encounter on this trip.

Dharavi in the middle of Mumbai is Asia’s largest slum, they say. From above it’s a patchwork of gray corrugated metal roofs, packed so densely that there are hardly any gaps, and none wide enough that they could be called streets. They actually run sightseeing tours through the slum, but I was content with the edges, it would feel like a zoo otherwise.