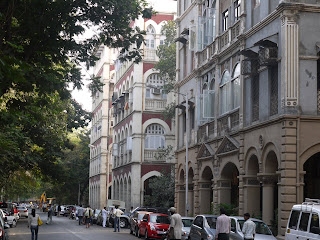 The interesting part of Mumbai, where nearly all the sights are, is a peninsula between the harbor in the east, and Back Bay in the west. Another, much narrower, peninsula wraps around the other side of Back Bay, and that’s where I went today. They have a few very nice parks (where “straineous exercise” is not allowed), and a large rectangular pool with stairs leading down on all four sides. People sit there and talk, or perform religious rites involving offerings, incense, and washing. There are many small shrines around it, and a large area where Mumbai’s clothes are washed. Back Bay is open to the Arabian Sea, but that side of the peninsula is very filthy.

Walked to Chowpatty Beach next. This part of town is nice, and I had a great lunch with a monumental chocolate sundae there, but the beach is not. There is an abandoned amusement park, huts made from bamboo and plastic tarp, with an open sewer running down to the water, and children are playing in the dirty water. They came out, smiling excitedly, to shake my hand and earnestly pronouncing their few English sentences, then ran back into the water giggling. 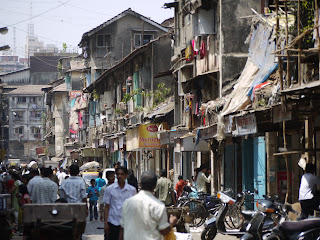 Also walked to the Chor Bazaar, a large part of town crammed with food and clothing stalls, and the ubiquitous cellphone repairmen. Chickens are killed, plucked in plastic buckets, and sold here. It’s quite dirty and slippery. There are many women I call Black Ravens – muslims with full-body burkhas and only an eye slit. One lifted her veil to spit on the ground.

Watched the sundown at the Gateway of India, and soon attracted the photo crowd again. I should consider a career as a model.

The bottom photo is from the Chor Bazaar area, and the top is from the Colaba area of town, the back side of the block my hotel is in. Mumbai is a city of contrasts.