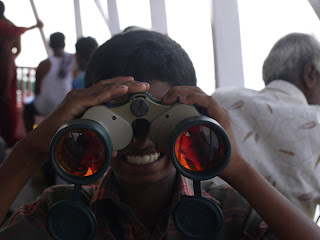 The Gateway of India in Mumbai is a monumental arch facing the sea. It’s best seen from the harbor so I took a harbor tour boat. It didn’t really work because it’s full of Indians; at first I didn’t realize why the two seats next to mine saw so much traffic, people constantly getting up and sitting down, until I saw that I was the main attraction and people wanted their picture taken with me. So we turned it into a party where everybody was taking pictures and showed them around. Many people wanted me to take their picture, children were grimacing. (The harbor itself is totally boring.)

I had inquired about rooms at the Taj Mahal Palace Hotel, a landmark next to the Gateway. But the palace wing is still roped off, boarded up, and shut down after the terrorist attacks in November. The tower wing is open, but it’s a boring office tower with some prefab concrete ornaments hung on the facade; it has a barrier, a fence, metal detectors, a gun emplacement, and a bag search station. I am glad I am not staying in this prison camp.

Mumbai, as expected, is a big noisy town with the usual honking traffic chaos. But there are lots of quiet leafy neighborhoods with old buildings that have a feel about them that almost reminds me of some old neighborhoods of Berlin (if they weren’t so dilapidated). Mumbai has many trees lining its roads, which hide some of the rundown architecture. There are also grand old palaces from British colonial times, big parks where people play cricket and rugby, and the most palatial train station – Victoria Terminus – that I have ever seen. Inside it’s not palatial at all though, and filled with masses of people in a hurry. There is a big bazaar to the north of the train station, with a heavy emphasis on electronic, and in Asia “electronics” is a synonym for “cell phones”.

As a Mumbai visitor I am obligated to choose a picture showing the Taj and the Gateway. It’s the #1 postcard motif here, and Mumbai doesn’t have a huge selection of those. But I like the one above better. I hope it looks good, this PC is unbelievably creaky. The shift key is missing too.