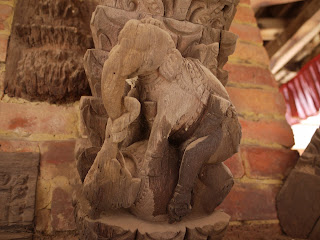 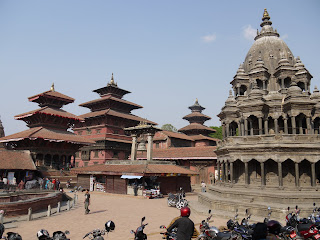 In Patan, the Machhendranath Festival is on, which involves carting an icon around for a month in two huge temple chariots with two-meter wooden wheels, and a huge tilting tree-like thing on top. It looks thoroughly impractical. They move so slowly that children play under the carts. The purpose of the whole thing is praying for rain, which has a good chance of success because the monsoon rains are approaching around that time of the year anyway.

Returning from Bakhtapur was tricky because two bombs were found on a bus there, and police were rerouting traffic away from the Kathmandu-Bakhtapur road. Rumors flew that an army convoy was blown up, but actually the bombs didn’t explode. So instead of seeing that filthy third-world slum road a third time, the taxi (yes mom, I don’t use local buses in Nepal, I don’t want to get squeezed to death by goats) had to detour through the villages. And they aren’t rich, but clean and pleasant. Maybe my initial impression of Kathmandu’s suburbs really was too negative. We also saw long lines at gas station, they have fuel shortages.

What is Tiger Balm anyway? Half the town sells that stuff.