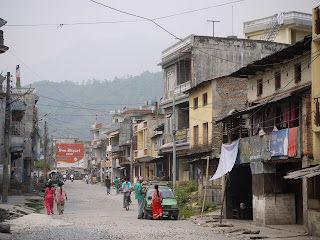 Walked around the dam into the hills. There are no signs, so I work like a wild west trapper – broken twigs, a paletr shade of brown leaves, scratches on stones – and of course the trail of plastic bottles, soda cans, candy wrappers, and chips bags also helps. I always know after 50m that I lost the garbage trail. Got rowed back across the lake by two children, who, like everyone else here, speak English.

Also walked to Old Pokhara, where real people live and nobody sells souvenirs and trekking tours. It’s fairly dirty, especially in between, where people hammer on radiators, lay in oil puddles under buses, cut trucks into small piecesand recycle tires are way past recycling. If there was such a thing as subsustence engineering that’s what they would be doing. It’s a long, hot, and polluted march. The old downtown itself is fairly nice, a no-frills neighborhood with a little market, and the Seti river which is very narrow but flows so fast that it has cut a 50-meter deep gorge through the town. You hear it but it’s difficult to see deep down.

Spent a little time on the monastery-and-temple circuit, but it’s quite unremarkable.