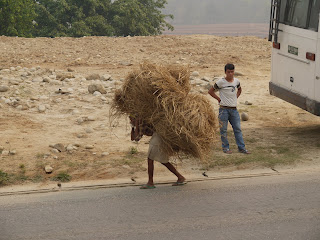 Not much to report today – the bus ride to Pokhara takes seven hours. The bus is supposed to be the best they have but it’s wheezing up the mountains at 25 km/h. But it’s clean and everyone has a seat, unlike on Nepalese local buses, which pack as much people, bags, and animals as they can fit inside and on the roof. Trucks, buses, cars, motorcycles, animals, and people carrying impossible loads (picture) share the narrow road. We passed eight army checkpoints because of some Maoist rebel activity, but everything is quiet at the moment so there is no delay. (As I type this, a small group of demonstrators carrying red hammer-and-sickle flags shouting paroles walk past the Internet cafe.)

Pokhara is touristy, as usual meaning many souvenir shops and trekking agencies but not a lot of actual tourists. An amusing number of teenagers do their very best to look like their hippy parents back in the sixties. Pokhara is supposed to be like Thamel but it’s far too relaxed for that, and much more spacious. And warmer. Unfortunately it has become hazy again so I can’t see the mountains; Pokhara is located at the Phewa lake in the Annapurna range of the Himalayas. Maybe tomorrow.

PS. Now it’s dark and I can see the mountains, at least where the forest fires burn.