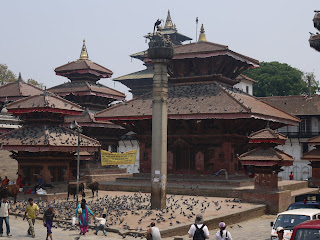 Kathmandu’s Durbar Square is a temple complex centered on the old royal palace, now a museum. Dozens of pagoda temples with tiered roofs and stepped terraces, some low and some nearly as tall as the pagoda on top. Plus a shining white neoclassical palace in the middle that looks quite out of place there. The pagodas are made from wood, mostly cracked and without paint. The carving is incredibly detailed and really deserves repair. Cows, dogs, and pigeons wander freely; have to watch out not to step on a sleeping dog. It’s quite hot.

Cars, motorcycles, and rickshaws go through this Unesco World Heritage, honking all the time to get the tourists out of their way. I saw an open army truck, four soldiers standing in front and eight in the back, and lots of handcuffed people in between.

This is a fantastic place if only they had shielded the place from the encroaching city and its traffic better. And spent more effort on restoration. The whole of Kathmandu I saw has many little temples, old houses with the same fantastic intricate wood carving, and beautiful old plazas – but it’s all neglected, decrepit, and not too clean, especially outside downtown. The Rata park is positively filthy. Like in China, people drop their garbage where they stand, but unlike China the armies of sweepers are absent.

[Added pictures to the previous three posts. Check out the Himalaya picture two posts down.]