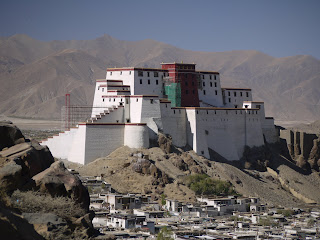 It’s a short drive to Shigatse, famous for its large monastery founded by the first Dalai Lama, and seat of the Panchen Lama. The complex is huge – much of it is old whitewashed quarters for the 600 monks. Three large white stupas are a memorial to the people killed during Mao’s cultural revolution; people circle it clockwise (always clockwise…), turn the prayer drums, and keep count with little piles of pebbles.

In the main hall is a 26 meter gold Buddha, dimly lit by many butter lamps tended by monks. On the side several old monks sit and chant scripture. Tibet at its best, the effect is hypnotizing. In the next hall they get down to business: there are long benches where a dozen monks sit cross-legged, large scripture books open in front of them. You can make a donation, and the head monk will read your name, donation, and preferred scripture section aloud, and the monks begin to chant that section. They have many very young monks, but they do all the work around the temple while the old monks just sit there and chant. Reminds me of work at home. Another hall houses a huge shrine with a drum on top containing the bodies of past Panchen Lamas. The monastery is beautiful, serene, and a place of active worship. It has impressed me a lot more than the Potala in Lhasa, which is far more imposing but really just a big, dark, and dead museum.

I spent the rest of the afternoon walking in the old town at the foot of a steep hill with the governor’s palace on top, and circled the monastery on a path just outside its walls, with thousands of prayer drums spun by old women walking with me.