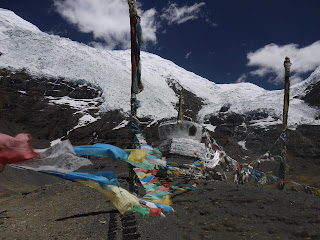 Tibet, roof of the world – I always thought that was hyperbole. But after our car left Lhasa and climbed out of the Tibetan Plateau to over 5000 meters, passing through valleys with the Himalayan mountains on all sides, I can see how apt the expression is. The horizon is incredibly clear and the sky there is a perfect blue. Looking up and away from the sun, the blue color of the sky turns so dark that it’s almost closer to black. There are a few small but brilliantly white clouds, and they seem very close. I half expected the space station to swoosh by.
There are lots of beautiful vistas along the way, and little lopsided shrines with prayer flags strung on long lines, and people with yaks trying to get some money from tourists. There is not a lot of snow where we drive but glaciers shine brightly at a distance. 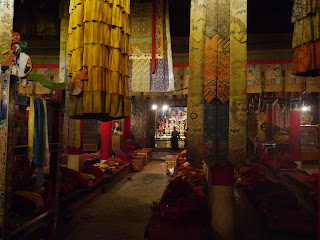 Gyantse is a small town at a mere 4000 meters. It has a mild case of Chinese architecture pest – the roads are too wide and the buildings are mostly new and, yes, sometimes covered with those nasty white bathroom tiles, but few buildings have more than two floors and it all looks like a sleepy village. The main attraction is the Baiju monastery, built up a hil crested by a wall. Many halls and shrine rooms filled with Buddhas and statues; not unlike the Potala but on a much less grand scale. And photography is allowed, after paying a fee (one per room!), so I catch up a bit.
There is also a conical building that looks like a large stupa, and I swear this thing is far bigger inside than outside. It’s supposed to contain 100,000 Buddha images and that number can’t be far off. Six floors, maybe a hundred rooms with Buddha statues from 1.5 to 6 meters tall, and no wal space wasted. There is also a beautiful view to the steep hill crowned by the governor’s palace, but it’s being renovated so I skip it.