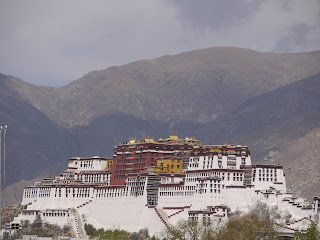 The Potala Palace is certainly the most famous building in Tibet. Ten of the fourteen Dalai Lamas ruled over religion and the country from here. It’s supposed to have 999 rooms but it felt more like 999 stairs in the thin air. Many rooms are quite small, including the personal apartment of the Dalai Lama; there are also large throne rooms, and several long and high galleries with Buddhas, other statues, and the tombs of several Dalai Lamas. The 5th Dalai Lama has the largest; he unified politics and religion under his rule by calling in his pal, the Mongol emperor, to do the dirty work.

All walls, columns, and the roof are brightly painted or hung with brightly colored silks, in the five colors that symbolize the elements – red for fire, green for water, blue for the sky, white for clouds, and yellow for the earth. There are many small tapestries hung from the ceiling that look like necktie shop displays. Despite the bright colors, the rooms look solemn and a little gloomy; all light comes from a few lightbulbs, and the ubiquitous Yak butter lamps. Professional lighting would work wonders on the Potala, but professional lighting is unknown in China. Only the top throne room in the Red Palace on top gets bright light from windows. In front of the throne is a huge pile of donated money; I estimate about half a cubic meter. We only get to see a small number of rooms; many others are empty or are used for storage. Nobody rules from the Potala anymore.

My guide is great – he explains the things that really matter, while the English signs and the Chinese tour guides are rattling off facts like how many square meters a room has, how many ounces of gold were used on a Buddha, and how much the things are worth. The Chinese guides even mix up statues and even temples. This annoys my guide greatly, he is Tibetan and prays at several shrines.

Ended the day at the Summer Palace, a much smaller palace in walking distance with airy bright rooms, set in a nice park. It’s for the Dalai Lama only, there are only a few buildings. The decoration is similar to the Potala, but simpler and less overwhelming.