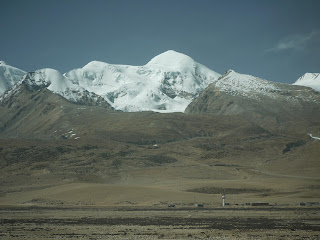 On the train to Lhasa, I had to sign a plateau travel health declaration. Among other things, I had to certify that I am not a “highly dangerous pregnant woman” and that I don’t get “the heats are above 100 times per minute”. I can see how that would be very exhausting. The Chinglish is getting better all the time.

I kind of expected dramatic high mountain scenery of the kind I visited in Kashmir, but the scenery is mostly flat plateaus with mountains not so very much higher on the sides. Snow starts to appear at an altitude of 3000 meters. The train is modern and smooth, and I sleep well. I got the equivalent of a first-class compartment (they call that soft sleeper), expensive but worth it. Each bunk has its own TV; I watched Harry Potter in Chinese. Each bunk also has an oxygen socket, they hand out “nasal oxygen cannulas”. The next morning I woke up at an altitude of 4700 meters, and when it reaches the highest pass at 5072 meters there is an announcement. It’s the highest train pass in the world. The train is not pressurized; the train toilets have open windows (which is a blessing on a 45-hour train ride).
I had never been much above 3000 meters. I don’t get altitude sickness, but I got out of breath quickly, and had to breathe deeper and faster than normal. But not the way one does on a hard bicycle ride, where your lungs hurt – it’s just like normal breathing, only more of it. Strange. I am too macho to use the nasal oxygen cannula (but there really isn’t any need).
The train restaurant’s idea of twice-cooked pork is a big quivering mass of pork belly fat without any discernible meat. The vegetables were good though. Close to the Tibetan border, my cookies exploded. (Go ahead, read that sentence again, it may be a while before you come across one like that again.) They are shrinkwrapped and the air trapped inside expanded at the high altitude until the plastic ruptured. I have a pre-explosion picture where the formerly tightly packaged cookie roll looks like a blimp. Ok, it was more a pop than an explosion.
I was picked up at the Lhasa train station by my guide for the next week. He is Tibetan, quite young, and very friendly. I’ll have to be careful to avoid mentioning touchy political issues to him… I am staying at the Kailash hotel, an uninspired modern but comfortable affair whose main distinction is its bizarre English brochure that ends with the words “Wish that you prick the West Germany bridle”.