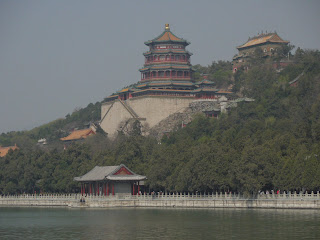 The Emperor didn’t want to be holed up in his little Fobidden City all the time, so he also had a summer palace north of Beijing on the shore of a fairly big lake that he had dug. The layout and architecture is pretty similar to the Forbidden City, minus the big reception halls, but a lot smaller. On the other hand it’s scenically built up Longevity Hill, which they created with the earth excavated to create the lake. No expenses spared. The three-story theater is basically a copy from the Forbidden City.

Much of it was destroyed by the Western allied powers in 1860 and rebuilt for Empress Cixi’s birthday parties. Cixi was faced with an unsolvable problem – repelling Western invaders with far superior weaponry – but she had a knack for not solving them in singularly inept ways, like squandering the treasury on her lifestyle. The money for the summer palace was supposed to be used to create a navy; she had a huge ugly marble boat built instead. When she died, she named a hapless three-year old boy, Pu Yi, as her successor, but the game was up three years later and more than two millennia of Chinese emperors came to an end.

The palace is in a quite pleasant park. There are lots of tour groups here, even though it’s a Thursday and I am still surfing the edge of the low season. Fortunately tour groups never stray far and clog a few major sights while leaving everything else blissfully empty.

Also went to the old Bell and Drum Towers, the center of Beijing in Mongol times. Lots of old hutongs (narrow lanes) around them. There is lots of repair and construction work done there – it looks as if China had decided that Chinese culture and historic quarters are valuable after after all and worth preserving, not only the buildings but also the style of the neighborhood (Dirk, your cue). Shadows of Pingyao. (But only shadows.) The quarter could do with fewer pizza restaurants though.