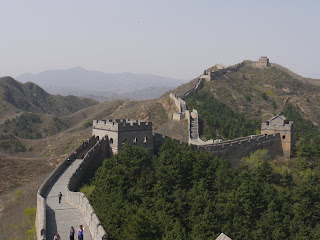 The Chinese Great Wall is not like a road. Roads follow convenient low paths like rivers. The Great Wall, on the other hand, unfailingly picks the most impractical and difficult points of the terrain imaginable – the highest and steepest ridges and peaks no matter how they curve. I wouldn’t want to have to carry even one stone up there, but they built 8000 kilometers of it in 1368 to 1567, of which 2000 kilometers remain today.

Most tourists visit the wall at Badaling close to Beijing, but that’s a crowded zoo crawling with tourists and souvenir vendors. I joined a group that went to Jinshanling, three hours by bus north of Beijing. We hiked ten kilometers on top of the wall to Simatai. There are very few people here, and the group quickly disperses until I rarely see another visitor. There are at least a few people selling warm water, Coca Cola, and beer (it’s a hot sunny day again and the Chinese neglected to properly plan the wall with power outlets).

“Hiking” doesn’t properly capture the situation though – since the wall is constantly climbing some hill, so are we. There is never a flat section, always stairs that are often extremely steep and in poor repair. Away from the endpoints, it’s sometimes just rubble; even the crenellations are missing in some places. There are guard towers in regular intervals; a few are in ruins. It’s quite exhausting but the views are fantastic. How they could ever hope to move an army up there to the right spot to defend the wall, without satellite reconnaissance and back roads, is a mystery to me. The wall was not very effective repelling invaders, but if nothing else it makes a terrific Unesco World Heritage site. 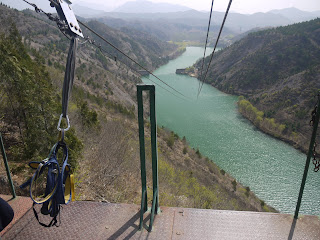 At Simatai we need to cross a river on an Indiana Jones suspension bridge, complete with wooden planks with gaps high above the river. There are no natives shooting arrows at us and hacking away at the cables though. Past the bridge, there is a dammed reservoir fed by the river with mountains on both sides. I could have walked down to a little village where the bus waits, but I hear some people in mid-air over the lake scream and whoop, so I investigate and opt for a cable ride across the lake.

You get a belt harness, basically three loops of rope around your legs and waist, which is hooked into a steel cable that runs across the lake. You sit down on a ledge high up the mountain on one side, looking down the precipice below with cables descending steeply, wondering if this was a good idea after all. Then you kick off and rapidly shoot down the cable across the lake with the mountain panorama all around you. It’s totally exhilarating, and over much too quickly!