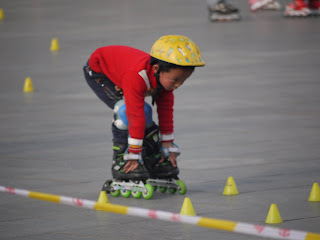 Spent the morning and early afternoon walking around Pingyao, since this is probably my last chance to enjoy a beautiful old town in China and its cuisine.

Taiyuan is a few hours north of Pingyao by bus. It’s an unremarkable modern town, but much enlivened by plants an little parks. Ailing trees line its main boulevards. I sat in a green square for a few hours waiting for my train, watching children skate.

The high-speed train to Beijing is more functional than elegant, but it’s modern, new and spotless, and quiet, like European intercities. It goes 160 km/h most of the time, 200 for some sections, and reached a top speed of 250. I was in Beijing after only three hours, but by then it was way too late to do any sightseeing.