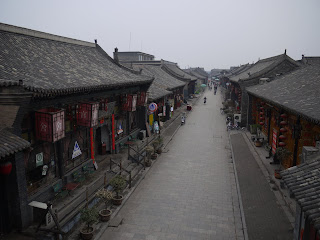 The bus from Yuncheng to Pingyao dropped me off right on the six-lane freeway. The driver pointed at the nearest exit and off he went. Apparently this is common practice, some people with motorcycles are waiting a short walk later. One leads me through a barbed wire fence, and he takes me downtown, first across the fields and then through the modern part of the city.

I am staying in the Yamen Youth Hostel. I seem to have better luck with hostels than hotels, and this one is great – it’s in a 400-year old governer’s residence, in the original rooms furnished in the old style with a gigantic bed that fills a third of a large room. I bet the governer didn’t have a bathroom though. It’s in Pingyao’s old town, where vehicles can’t go.
Pingyao was rich during Ming times in the 16th century, but it’s been poor for the better part of the century. Too poor to tear down all those beautiful low Ming-era buildings lining all its streets and replacing them with ugly concrete boxes with white bathroom tiles on the outside, and too poor to replace the imposing city wall that keeps the concrete outside with tour bus parking lots. Most of the old town is in good repair, and it really feels like an authentic Ming town and not dolled up for tourists. Of course it can’t possibly be five hundred years old and still look so good, but they did an excellent job. There aren’t even a lot of souvenir shops. Once again, I am paying for the absence of tour groups with gray skies.
I bought the city admission ticket and visited a 14th-century government complex (quite spartan rooms), a more elaborate Taoist temple complex for all sorts of gods including a kitchen god, and a Confucian temple complex. After that I felt kind of templed out and went to the hotel to write it all up.
PS. The hostel hat a “dumpling party” that night, and I learned how to make Wan Tan like dumplings. It’s all in the way you hold your hands when folding the dumpling.